Wimborne is an historic Minster town that straddles the River Stour. Today Wimborne is a genteel pleasant town, but in the past it was notoriously lawless. It was also the home to number of notorious occupants, including the legendary smuggler Isaac Gulliver and (possibly) Jack the Ripper.

The 19th Century turn-stile on the path to Canford

Sir Melville Macnaughton of Scotland Yard was convinced that the local Wimborne resident and barrister Montague Druitt was the notorious London murderer. Druitt committed suicide - just after the last murder.

While Wimborne is a fine town with lots of history, the mile long Stour Valley Way footpath traversing the town is one of the least pleasant parts of the footpath. It is not worth sticking to the footpath through Wimborne. It is more interesting to take a look at (say) the fine 15th century Minster Church or visit the bustling Friday market instead. The best place to re-join the footpath to Canford is on the outskirts of the town, at the boundary between Wimborne and Poole.

After passing over the bridge that marks the boundary between Wimborne and Poole, there is a turning off the road, about 25 m past the bridge, by a Victorian gate house cottage.. This turning takes you down the bridleway and the eventual river walk through to Canford and the gates of Canford School.

Just off the road the first thing you have to do is pass through the 19th century turnstile. You then follow a wide track through to an old Victorian Railway bridge.

This ornate mid Victorian bridge took trains over the main driveway to Canford House. It was built in 1847 by the Dorset Central Railway. The railway line was in regular use until the Beeching cuts of the 1960's. The last passenger train passed over the bridge in 1964. It was still used until 1977 for freight trains. The bridge boasts some of the most ornate carving of any railway bridge in the country. Today it remains as a sad, though splendid relic of a bygone age.

Your family history is important. But displaying it in a coherent and clear manner is difficult.
A Simple Guide to Creating a Family History Book by Marian Rees A Beautifully presented book that makes ideal gift for less than £6.00 A simple low cost guide that breaks through the presentation problems and shows how to produce a treasured and valuable family heirloom without breaking the bank. 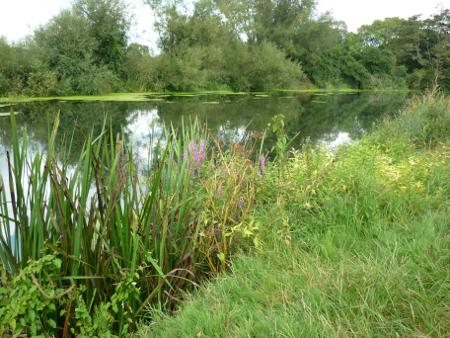 The River Bank near Wimborne

The bridleway is about 30-50 meters from the river. Unless you are cycling, will soon become somewhat monotonous and be just another wide though pleasant footpath. However, there are access points on the left of the track down to the tow path along the river. Taking one of these cut throughs is by far the best option. The first one I personally came across was by the side of a very large and old Oak.

The tow path follows the river for almost all of the way to Canford. Towards the end it loops round the buildings of the local fishing club. The end of this walk is at Canford School entrance. But the walk back can follow a different and equally interesting route.

The suspension bridge across the River Stour

Coming back along the path from the path exit to Canford School, you will see a mini suspension bridge traversing the River Stour. This is just wide enough for one person at a time. Crossing the bridge is fun. As this is a suspension bridge it sways as you cross. Also, from midway gives a really good view both up and down the river. Interestingly, the suspension bridge (at the time of my last visit) was also a demarcation point in the river between an area free of Duck Weed and an area clogged with Duck Weed. The river here flows down a weir into a pool. The whole river around Wimborne and Canford appears to have a slower flow rate than that in Christchurch. As it flows into the pool below the suspension bridge it appears to become stationary. After crossing the bridge if you go to the right, you walk behind Canford School.

If you return to Wimborne, you can stay on this bank. Part of the land you will be crossing is privately owned. However the land owner has allowed rambler access and even built another unique narrow bridge to get across one of the tributary streams. Finally you leave the river near a new housing development and cross back into the main traffic in Wimborne.

All together, an interesting and extremely diverse walk. Ranging from the highs (river bank, railway arch, suspension bridge) through to the lows (noise and fumes of the traffic on the main drag through Wimborne).

Generally this is a good walk with many interesting features, but one that needs a little thought to avoid the main roads.

The view upriver from the suspension bridge 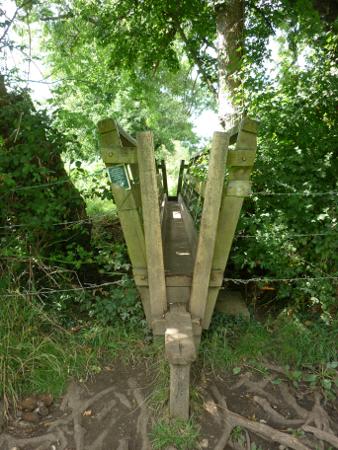 An even narrower bridge on the way back